A note on my folios

I‘ve been making what I call “folios” since 2016. The idea is to take the traditional alchemical pictorial series as an ideal and to play with how it might be possible to work this way now with my art.

Jung returned again and again to various alchemical series that he found to be rich and important for the western psyche, and I’ve taken these (amongst others) as an ideal – not to imagine I can emulate their psychological depth, but as a template for my own processes.

Two series in particular stood out for Jung. One is the “Rosarium Philosophorum” (1550) – 20 woodcuts that are about the development of a “Self” (as understood by Jung) out of the chaos of the unconscious. Pretty important!

So using this approach as a template, a folio for me has been a series of images that mark a trajectory, a psychic interest, to see how it develops and resolves over the series of images. To greater or lesser extent, I’ve found this process to be natural, organic and revealing of aspects of myself that I’d been less aware of.

The folios started out as digital photomontages using found images. Here’s the first if this type: Philo-Sophia.

Then I started to add word-pieces to each image. (See dream tales.)

Later, I called the text associated with an image a “scriptural fragment”, to play with the idea of how writings can conceivably move from the quotidian to the revered (at least by the artist!). It’s been an engaging and satisfying process. (See placards, cerebria.)

Most recently I’ve moved to making small oil paintings on paper as the images in a folio.

The image here is a composite of the visions of the diviners folio. It consists of 12 small oil paintings, with titles and scriptural fragments, that chart visions seen by wise teachers in the imaginal realm of cerebria. (More on cerebria is for another post.) 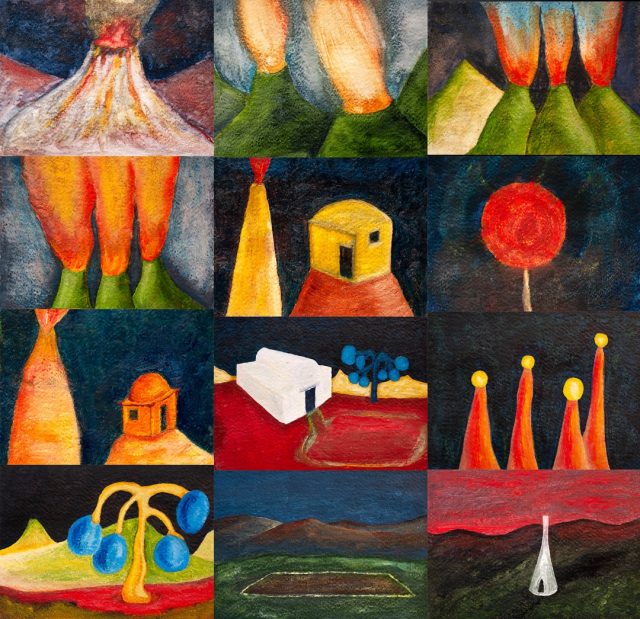 visions of the diviners

(The second work Jung was very keen on is the Splendour Solis (1582), rich in alchemical wisdom about transformation and therapeutic processes.)