haunts of a romani master

A folio of 18 paintings, with accompanying scriptural fragments, concerning some haunts of a romani master, in an ambulation he made from the port to the mountains of cerebria. (Here is a clavis, or key, to the realm of cerebria.)

The works are oil on gesso on Fabriano Artistico watercolour paper, each 28 cm x 19 cm approx., created in 2021.

1We sailors, under instruction from the diviners, have sought a romani master. 2Though unseen by many, we hear tales, from those who have encountered him, of his electrifying jouissance. 3With bells in his earrings and shimmering gold bangles, he is for them an unforgettable experience. 4Some speak of how, with dark and vibrant eyes, he looked deeply into them. 5They felt seen like never before, recognised to their core. 6Peripatetic, known to speak aphorisms, sometimes leaving signs in the places he inhabits, from time to time, in our realm. 7We speak of some of his haunts during one of his ambulations.

As quoted by this romani master:

“To be a philosopher is to take to the road, never settling down in some place of satisfaction with a theory of the world, not even a place of reformation, nor of some illusory transformation of the conditions of this world.” – Henry Corbin, The Theme of the Voyage and the Messenger.

“Understand and trace things to their infinite source and roam about in the sphere beyond the evidences of reality.” – Chuangtse’s commentary on Laotse’s Knowing the Eternal Law.

“Nor do I know that I know him not.” – Kena Upanishad. 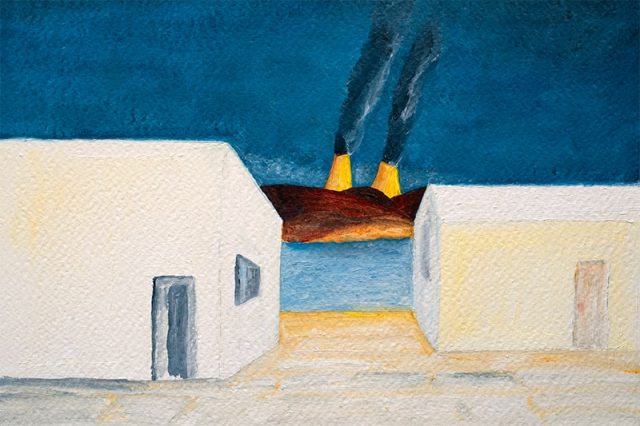 1A romani master walked the paved ways of the port of cerebria. 2Volcanic cones smouldered. 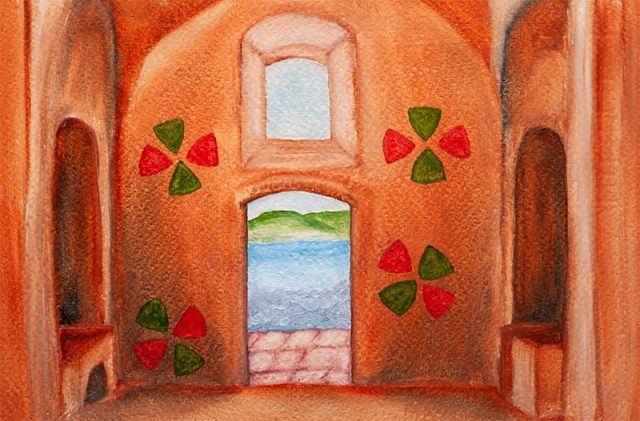 1We sailors were exploring an abandoned place of worship at our port. 2We knew this romani master had passed by, for we saw he had painted marks of his deliberations on the walls. 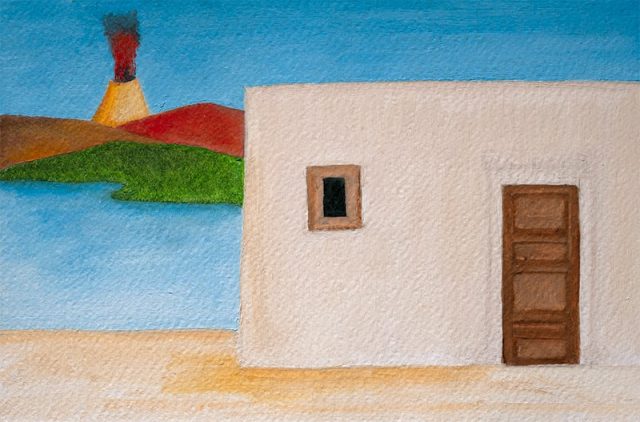 1We encountered a simple abode in which this romani master had undertaken a long period of contemplation. 2We became mute for a long time.

4. respite from a harsh sun 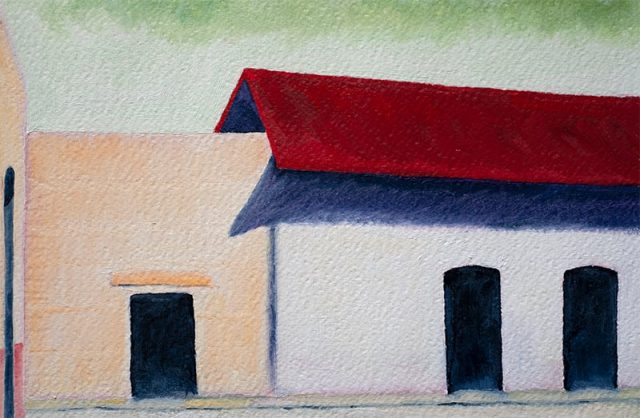 1Legend has it that in a simple abode the romani master took respite from a harsh sun. 2In the tenebrous interior of this abode he was able to further his deliberations. 3His discoveries became part of the teachings of the diviners. 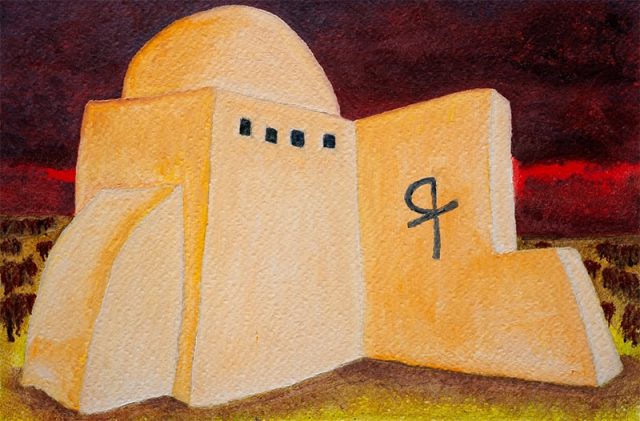 1In the lowlands south of agalia, we chanced upon a haunt marked with the sigil of the romani master. 2Inside, writings on the walls exhorted us to seek “only the eternally further-beyond”. 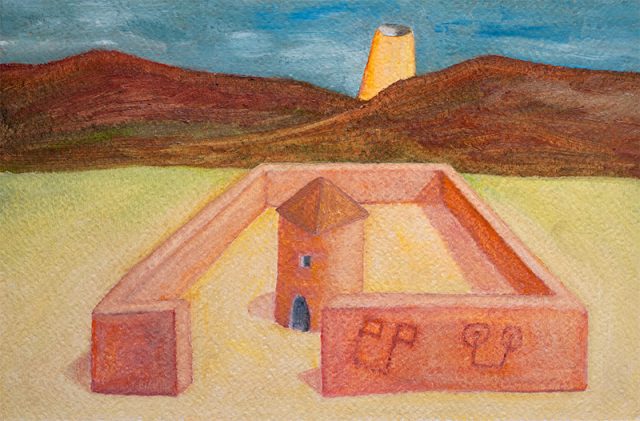 1The romani master spoke of an axis orthogonal to the four points of the compass. 2He had a compound built that demonstrated this axis. 3It was a place for its contemplation. 4The master had an outside wall marked with the sigils of the diviners and the sailors, indicating that the vertical axis was a fitting topic for their study. 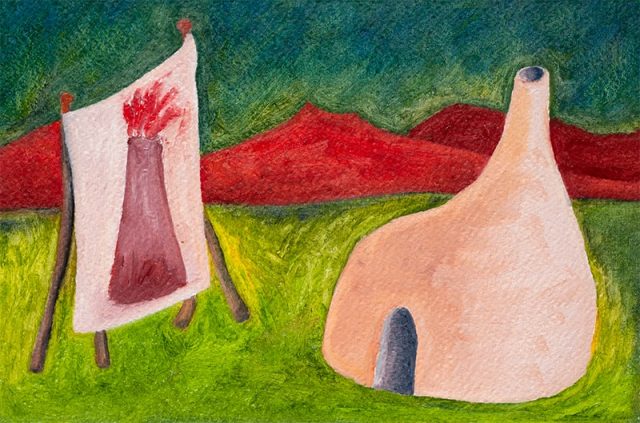 1On the way to agalia, the romani master contemplated in a tent like a cucurbit. 2One day, to a group of sailors, he expounded teachings on the volcanoes of cerebria. 3One such volcano he depicted on a placard. 4Sailors learned that, as much as they needed the volcanoes, the volcanoes needed them. 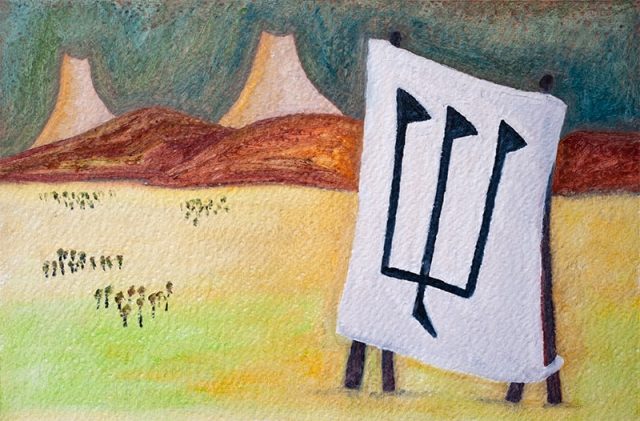 1The romani master revered the three visiting voids. 2He had a placard erected on a vast cerebrian plain, to remind passing sailors of the voids. 3The placard depicted the sigil of the voids. 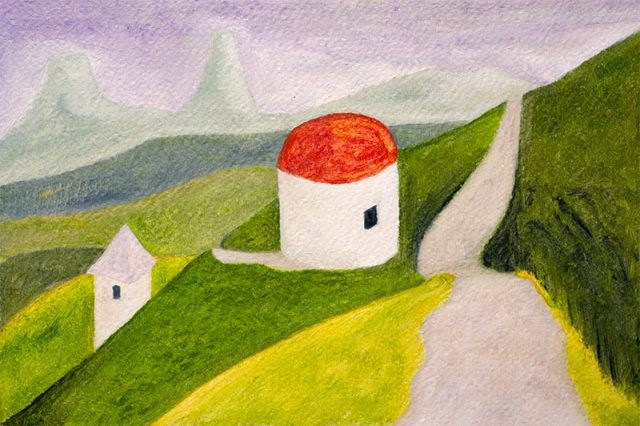 1On his way to the upper lands of cerebria, the romani master chanced upon an abidance with a blood-red roof. 2In this abidance he deliberated for some time, on his plans to visit agalia and beyond. 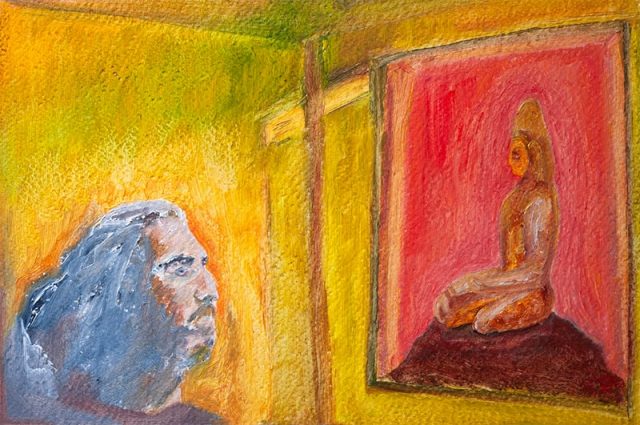 1The romani master, working in the red-roofed abidance, made an icon of several bloods. 2This icon depicted, and he dedicated it to, a saint of his realm. 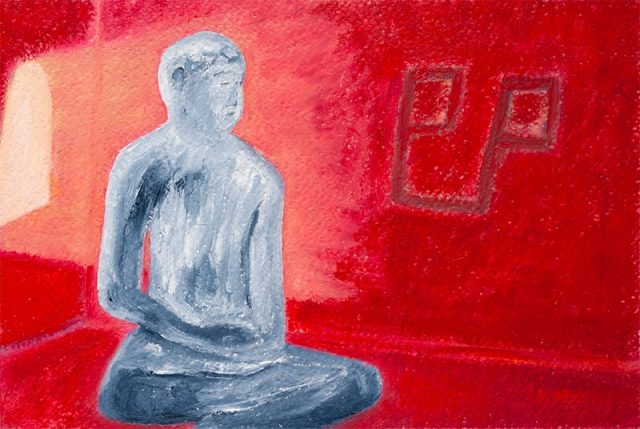 1Contemplating in the red-roofed abidance, the romani master divined an embodiment. 2On a wall, the sigil of the diviners appeared. 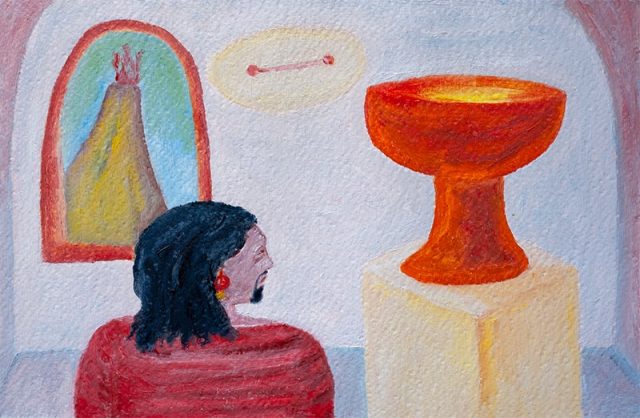 1In the red-roofed abidance, the romani master saw an ellipse on a wall and a cup resting on a plinth. 2The foci of the ellipse represented two vast cities, one to the East and one to the West. 3He saw that these cities are connected. 4The cup emitted a compelling glow. 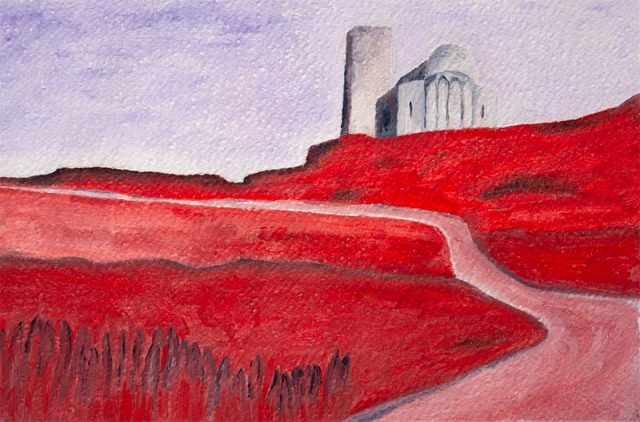 1Later, the romani master ventured deep into the red hills, which became hanging valleys high in the mountain range. 2He passed by temples and shrines.

14. evening came to the hills 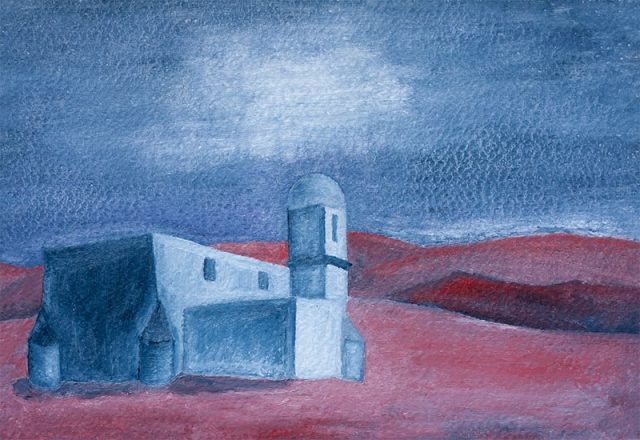 1Evening came to the red hills. 2The romani master lingered near an abidance used in the conveyance of sailors who were passing away. 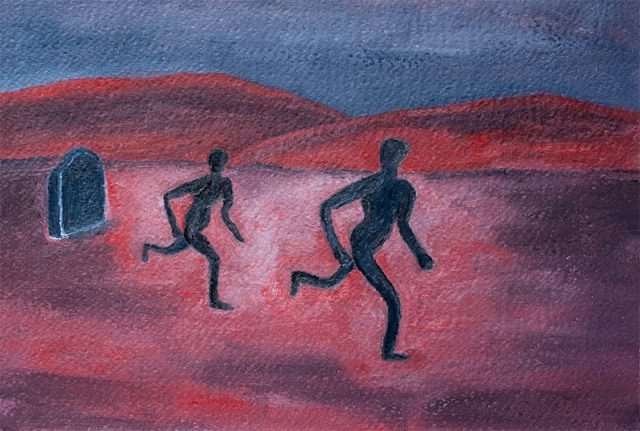 1That night, deep in the red hills, the romani master came upon a dark plain. 2He saw two sailors rise from their grave and begin to run. 3Their tomb was dark and empty. 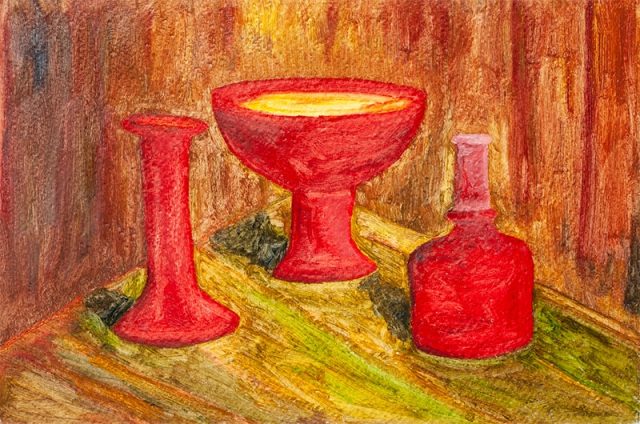 1Entering the tomb, the master lighted a taper in order to find his way. 2In a corner of the tomb, illuminated by the taper, he encountered three vessels made of blood. 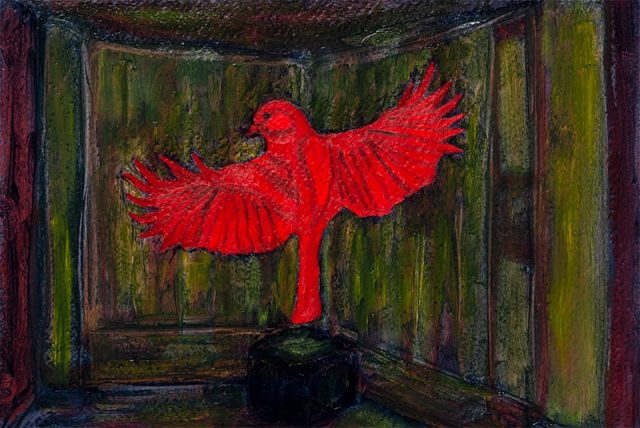 1In the fading light of his taper, he turned to see a dark cross on a plinth. 2The cross gradually transformed into a blood-red bird, that rose from the plinth, its wings outstretched. 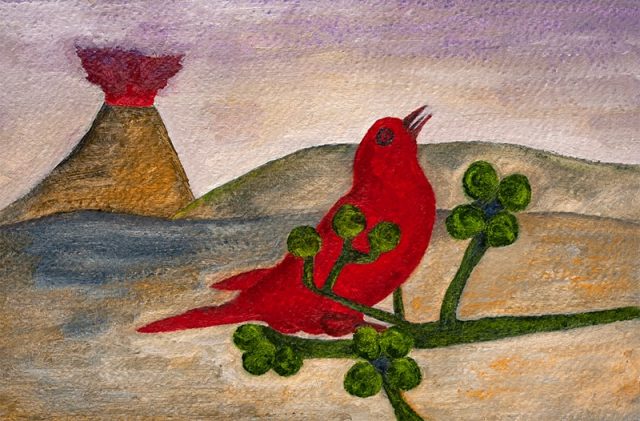