These characters appeared in the four folios Tableaux, A Tale About Ore, a robe and dream tales. 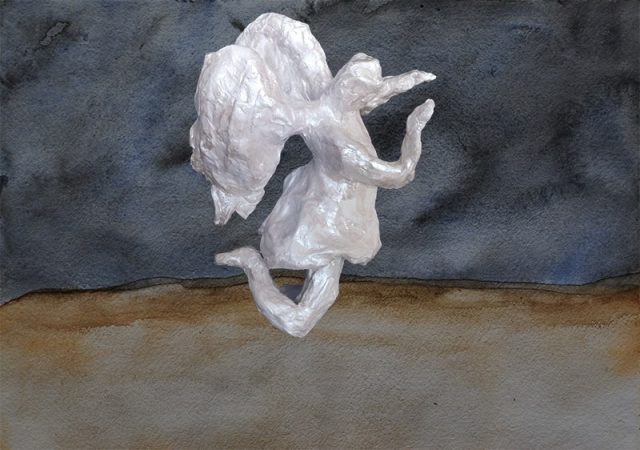 Anthony Over a Field

Anthony is an hermetic angel. He may be one of the 300-or-so Enochian angels, though his name does not appear on any of the known lists. This, he feels, serves him well, in his interactions with the participants of various earthly events.

Hermes can so convincingly hover before us, lead us on our ways, show us golden treasures in everyone through the split-second timing which is the spirit of finding and thieving… (Karl Kerényi, Hermes Guide of Souls, p51)

Anthony has appeared in Anthony Blessing (where he blessed the betrothal of Iris the Betrothed and Humphreymagus), in Anthony and The Eagle and in Anthony Finding Ore. 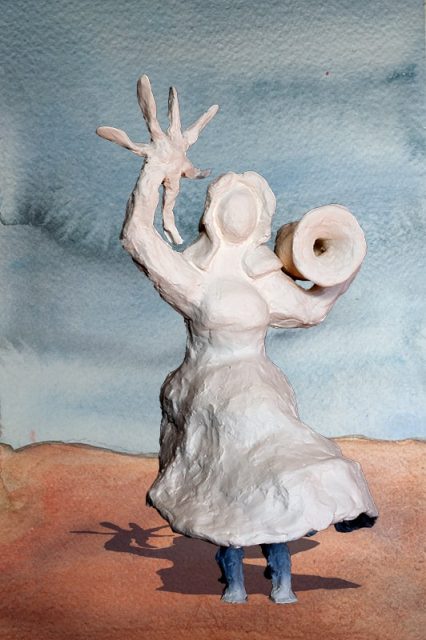 Ariana holds the star/sunburst and the vessel, the sun and the moon, and the knowledge of their relationship. She is often pregnant with Ore.

Ariana has appeared in The Rewombing of Ore and in Ariana and the Lions. 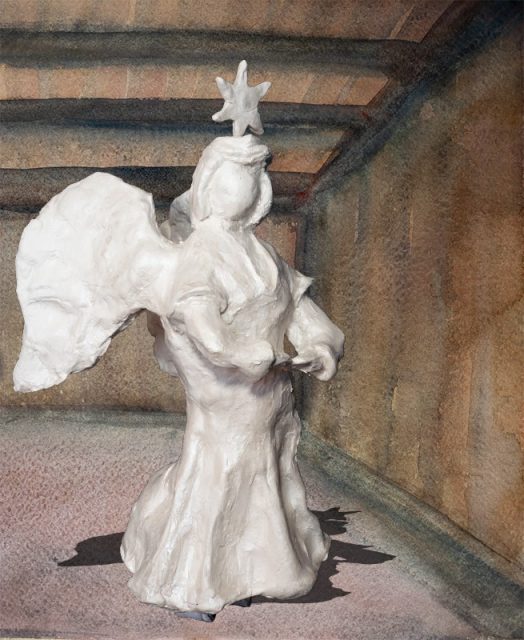 Aurelia in a Room

Aurelia comes with an association to gold and to the sun. She appeared after the first birth of Ore as a Trismegistus. She held Ore in the subsequent Expiation. 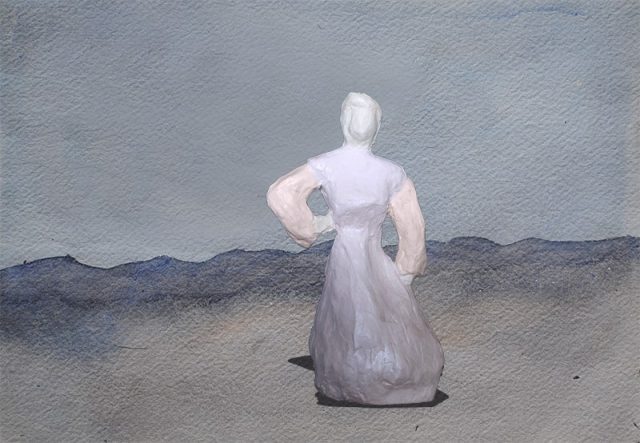 Belle in a Scape

Belle has a sweet disposition, making her attractive to humans and animals alike. She has appeared recently, with adoring ferrets, in Belle With Ferrets; and with ferret and goat in Peregrination.

Belle has a deep and hard-won understanding of the importance of events that take place near the sea. Her travel was long and arduous to find the place of these events. She was often accompanied by knowing animals. 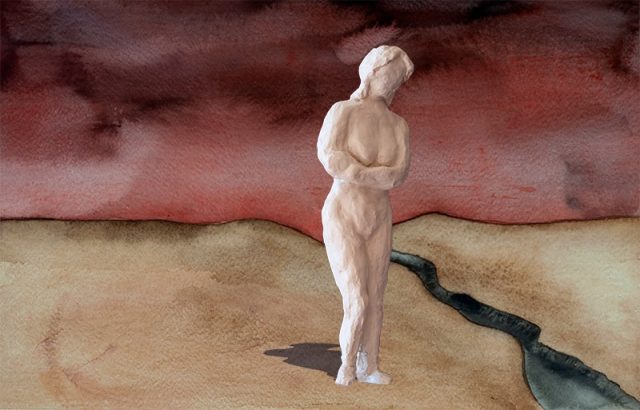 Christabel has been an attendant in a robe. Christabel has a quiet Sophianic wisdom. She understands waiting – for the appointed times of events to occur, while maintaining great empathy for the participants.

Relating to her understanding of The Fall of Sophia, the following passage is relevant:

“The fulfillment of the myth and the restoration of the fallen Sophia as the divinity who represents the soul of humanity, and the recovery of a forgotten ancestor wisdom, could be brought about, not by a divine “saviour”, but by the dawn of a new self-consciousness among individuals, a consciousness of themselves as members of humanity, irrespective of any differences of race or nationality.” – Violet McDermott, The Fall of Sophia, p99 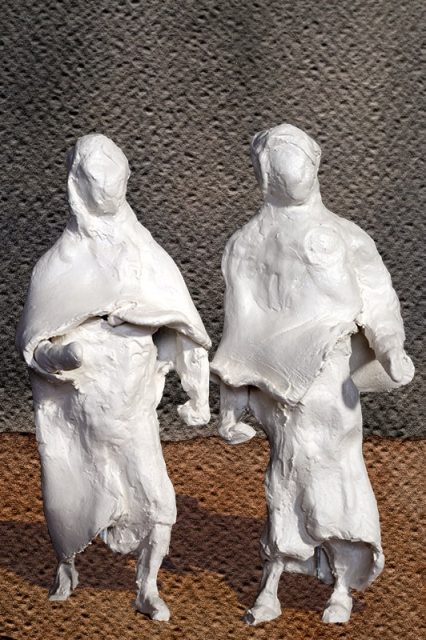 The Couriers in Attendance

“I left the East and went down
With two Couriers [with me];
For the way was hard and dangerous,
For I was young to tread it,” – The Hymn of the Robe of Glory

The Couriers are twins. They have also been known as the “two men in shining garments”. In the Series a robe, they can be seen as twins in this Plate and in this Plate. In this Plate, each is triplicated to make the six pallbearers. 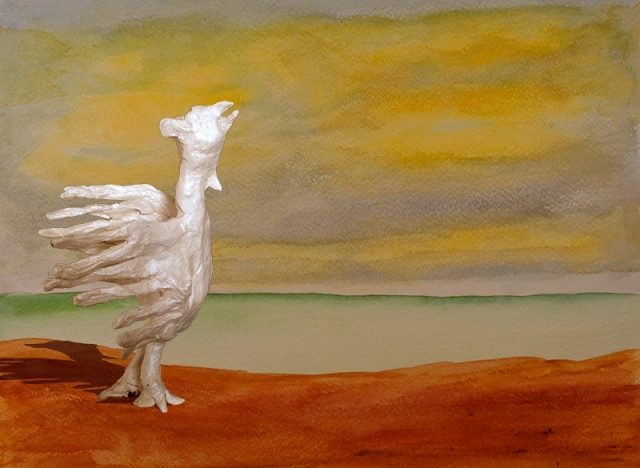 Dennis is the early dawn rooster, the intrusive cock, that heralds a new day. Above, we see him in the Tableaux series, announcing a Rising Dawn, an Aurora Consurgens. This heralds a full day of events at the sea-side setting. 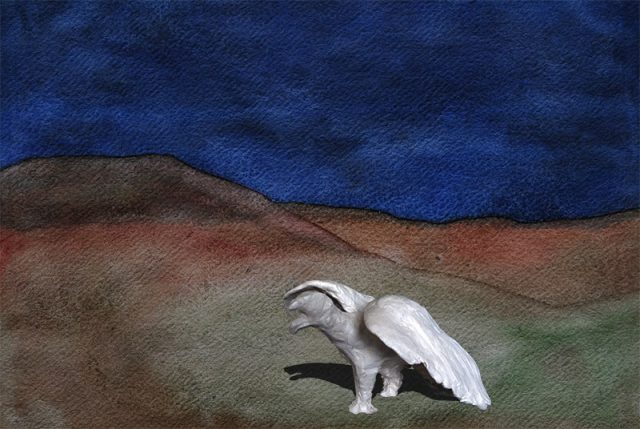 The Eagle is, obviously, wild, and as such does not have a personal name. Attracted to Isadore, he exclaims and lifts his powerful wings to her dancing. The Eagle appeared as a double in Isadore Dancing. Galatina in a Field

Galatina is a bee. She connects with the dawn, with the sun and with the warmth of the soul of the land. Galatina has appeared in Galatina Returns and Galatina as a Swarm.

She may be connected to the mediaeval ritual of tarantism (YouTube link), associated with the town of Galatina in Puglia Italy. 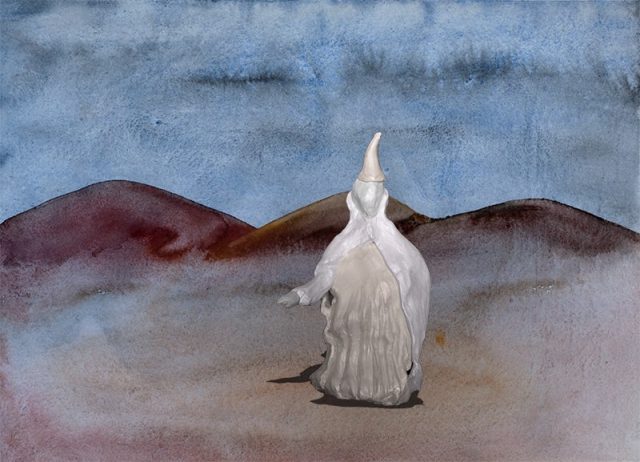 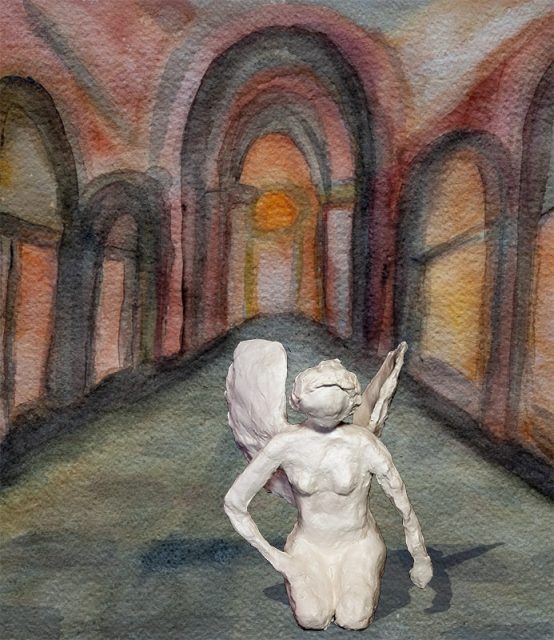 Iosefina is of Polynesian and angelic descent. She has a deep connection to the earth, and is often seen on her knees, sensing what is happening beneath her.

“…her fruit is more precious than all the riches of this world, and all the things that are desired are not to be compared with her….Her ways are beautiful operations and praiseworthy, not unsightly nor ill-favoured, and her paths are measured and not hasty, but are bound up with stubborn and day-long toil. She is a tree of life to them that lay hold of her, and an unfailing light.” – Aurora Consurgens, p35

Iosefina divined an open grave in Christabel Attends Iosefina. She was seen reflecting upon a tombstone in Iosefina Longing. 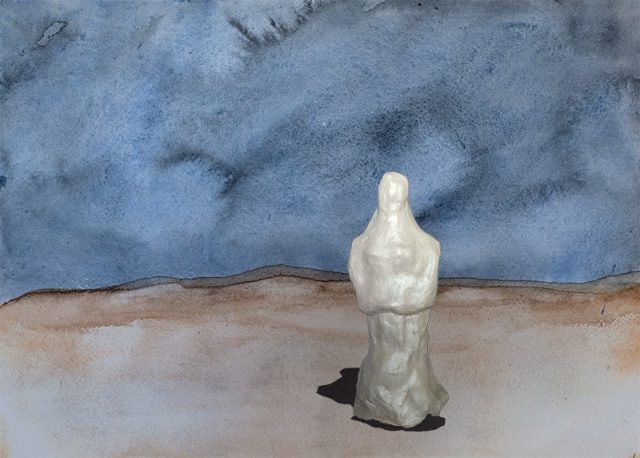 Iris is betrothed to Humphreymagus, hence her name. She appears shrouded, in the way of some traditions relating to rites of marriage. Betrothal, for Iris, is the part she plays in events near the meeting of land and sea.

Iris the Betrothed appears with Humphreymagus in Augury and in A Seaward Question. 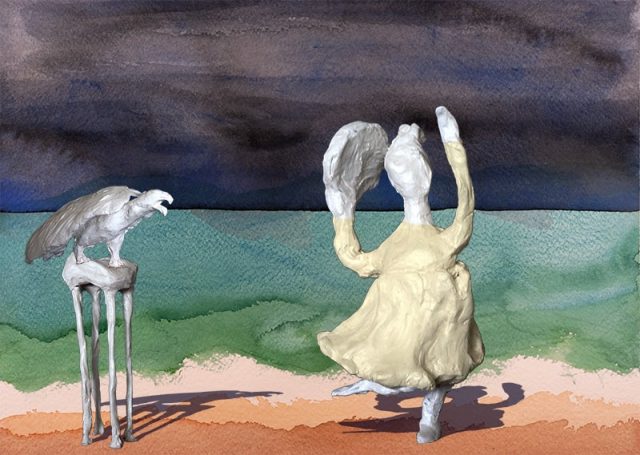 Isadore is an adept at the solo mazurka, an important event in the performances depicted in the Tableaux series. As the Wikipedia Mazurka entry says:

Isadore’s dancing is often accompanied by The Eagle. 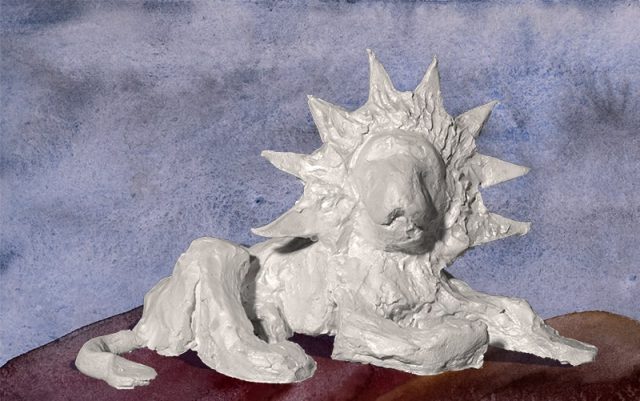 Jefferson has been a keen observer of various processes and rituals. He tends to take the high ground. Jefferson was present in Ariana and the Lions, and attended Ore in Ministry. 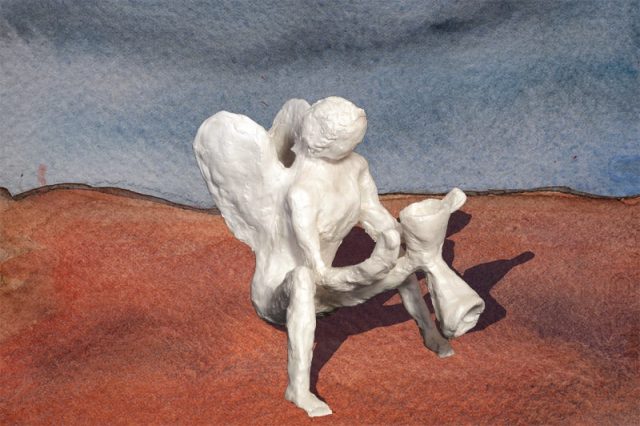 Jeselmina periodically gestates. She is known for her external womb, and famously appeared (in a still-wet form) in Reconception of Ore. You can see another view of her, incubating, in Gestation; and she also grieved in a cave in a robe. 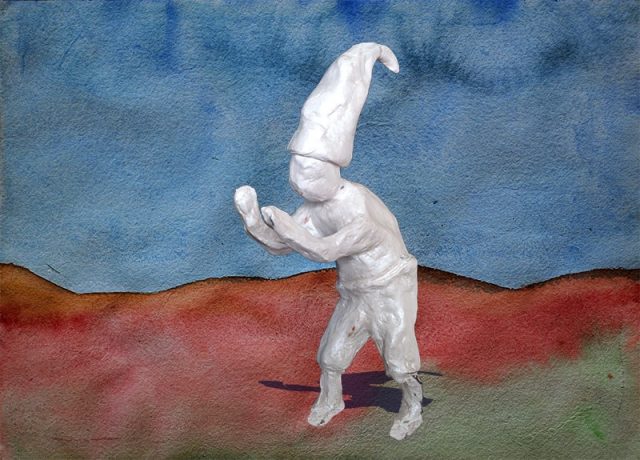 Bruised by the schisms within Post-Lacanianism and by the schizoanalysis of Deleuze and Guattari, Junior while still young retired to the Medieval realm painted so exquisitely by Fulcanelli in his Dwellings of the Philosophers. From here he surveys the ruin of the post-gothic, our contemporary lives.

Yet he has also constructed for himself an imaginal realm in which the gothic, the hermetic, still flourishes. He ascribes to Fulcanelli’s view that:

“Gothic art is in fact the art got or cot – the art of light or of the spirit.” – Fulcanelli, Le Mystère des Cathédrales, p43

In the photomontage Sensing, Junior was wrestling with this realisation; he was surprised and overjoyed to find vestiges of the living gothic in the dark fish, which were its portents.

Junior was tossing Roland in Roland Tumbling, but you cannot see him in the image. 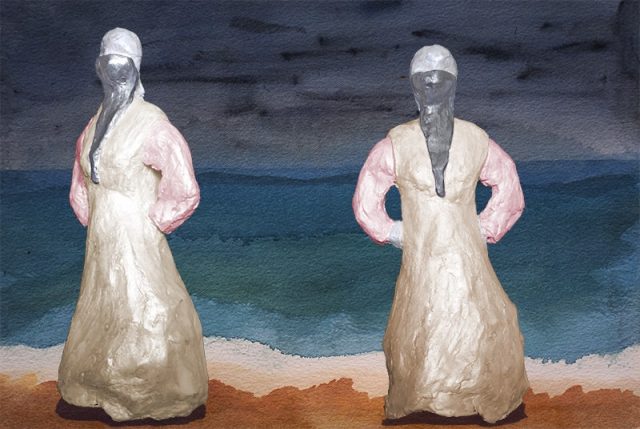 We know little of the biography of Mantic Woman, except that she was originally from Egypt. However, we know of her presence – the sense that when near her there are subtle emanations of a deep, dark, feminine truth.

Mantic Woman is quiet, shrouded, perplexing in some ways. Much of her time is spent on the shores near where performances are held. In the image above, she appears as a double. This is not uncommon. 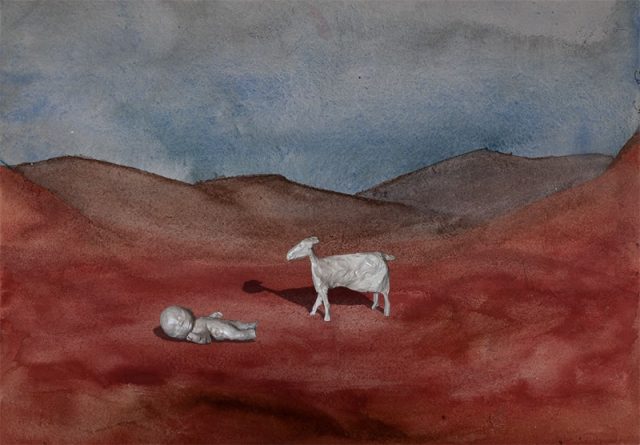 The Baby Ore, with Nestor the Goat, in “On a Northern Slope”

Nestor first appeared as a double, responsive to the Heralds’ calls, in Erinyes and Heralds (in the Sounding series). His involvement in the Peregrination of Belle was a subsequent step.

In the series A Tale About Ore, Nestor encountered the baby Ore on a Northern Slope and provided succour (image above). 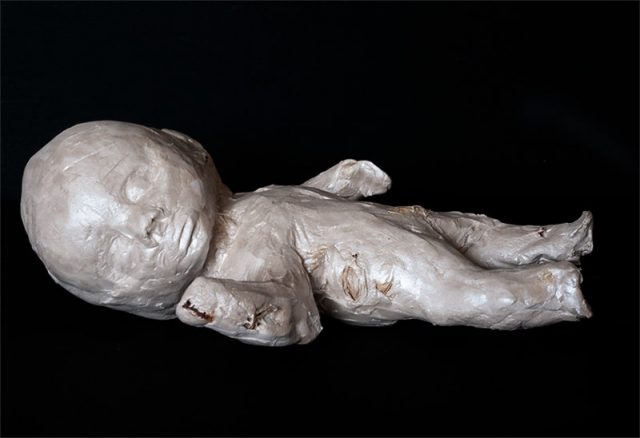 Ore in a Void

Ore is a newborn. He comes bearing “streamers” from an unknowable realm. He has been swaddled, but is now naked.

Ore was wounded in the side (as happened to ancient antecedents). He partook of several ceremonial activities in the Sounding series, and has returned in Tableau, watched over by Nestor.

Ore has his own series, A Tale About Ore. 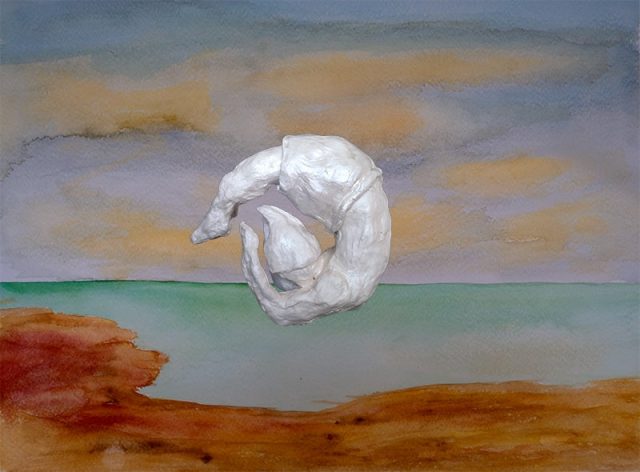 Roland’s joy is to tumble. He does this in the Tableaux series, and his act is important in the performances that occur near the sea. Junior told him about Deleuze and Guattari and the idea of a Body Without Organs and he doubts that this applies to him.

It’s been said by some that when Roland executes a particularly light and exquisite tumble he forms the outline of the ancient Ouroboros, symbolic of mythic depths being made available, to be consumed and assimilated by a conscious mind. 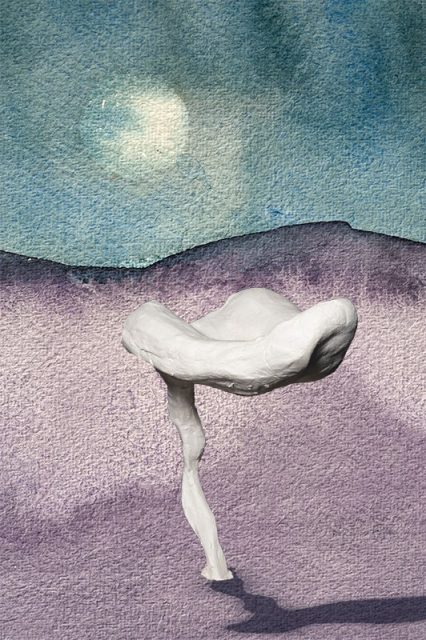 Tibble in a Landscape

Tibble is the articulate tongue of the soror mystica. Tibble spoke the revivification of ore in The Rewombing of Ore.

Tibble, multiplied to a grove, also appeared as Ore, in Ore as a Tibble Grove.

I’m grateful to my wife, Amanda Gruhn, for naming many of the characters, and for being my constant soror mystica.