“There is a shade, behind things, yet deeply present…” I was born and raised in Rotorua, New Zealand and spent a lot of time as a child amongst the hills, lakes and forest around that area. I studied Engineering at the University of Canterbury and left with a Masters degree in Artificial Intelligence (thesis: A neurochemical model of the brain).

I’ve worked as an engineer, software developer, business analyst, and, since 2006, as a psychotherapist and analyst, applying both a Gestalt and a Jungian perspective.

I studied art in the late 1990s first at COFA (University of NSW), leaving with a BFA, and then completing an MA (Hons) in Fine Arts from the University of Western Sydney in 2001 (thesis: An Inquiry into an Imaginal Landscape). This thesis examined the inner experience of landscapes using the lenses of James Hillman and other contemporary thinkers.

I exhibited in several solo exhibitions in the late 1990s and early 2000s.

In 2015 I began to focus my attention on artmaking as imaginal inquiry, and the esoteric in general, as a daily practice. The fruits of these endeavours are the folios and word pieces from 2016 onwards. I feel this work is carried by a rich undercurrent that is deep and exciting. I’m eager to explore more of these poetic depths. Pointing Out The Vessel

I know we must collectively find another way of engaging with this exquisite planet and this mysterious and limitless consciousness with which we are endowed, and I try to explicate such a way in my works.

The works themselves have recently been photomontages of digital images, digital painting, watercolours and small sculptures. (See, for example, the folio Tableaux.)

I love the surprises that occur in bringing together elements of different mediums and sometimes from different time periods, to form a unified work that transcends the disparate elements and (hopefully) speaks of the unconscious depths from which it arises.

More recently still, the folios have consisted of oil paintings on watercolour paper, with accompanying scriptural fragments. (See, for example, the folio visions of the diviners.)

“Modern hermetic art attempts to return to … ancient conceptions of the arts and the artist. It attempts, through all its forms … to repossess the magical powers of the imagination stultified by millennia of rationalism.” (A.C. Evans) 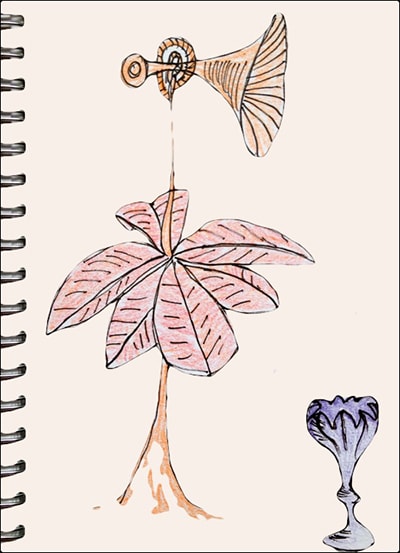 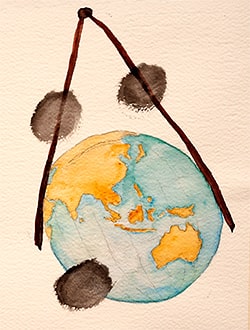 The logo depicts callipers subtending our watery globe, attended by three comets which represent and embody the three visiting voids. It’s a detail from what i, the caterpillar, said.