Quotes from “Hermes Guide of Souls” 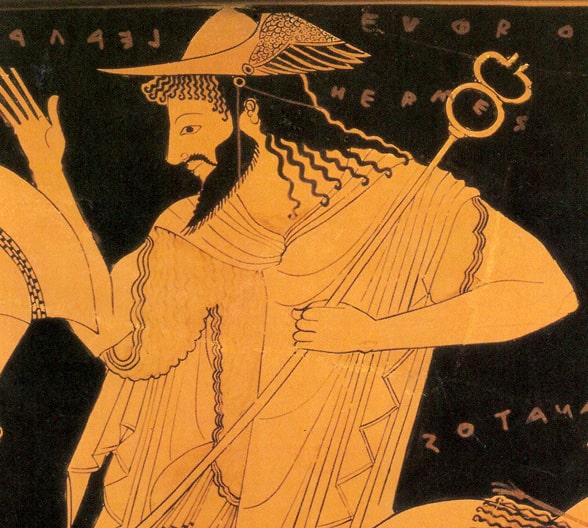 Hermes is such an interesting character, and Kerényi was such a lover of him. Here are some enduring statements about Hermes from Karl Kerényi’s 1976 book Hermes Guide of Souls:

Hermes can so convincingly hover before us, lead us on our ways, show us golden treasures in everyone through the split-second timing which is the spirit of finding and thieving… (p51)

The answer to the question, “What appeared to the Greeks as Hermes?” can … be expressed as follows: he is the supra-individual source of a particular world-experience and world-configuration. Certainly there is also an experience of the world that rests on the assumption that man stands alone in the world, endowed only with a consciousness that is exclusively restricted to the ability of receiving scientifically evaluated sense impressions. No such assumption exists, however, when it comes to that other experience of the world which the antique statements correlate with Hermes. The experience of the world in this manner is open to the possibility of a transcendent guide and leader who is able to provide impressions to consciousness, but of a different kind: impressions that are palpable and manifest, that in no way contradict the observations of natural science, and yet extend beyond the attitude described above, which is the common one today. (p53)

With Hermes as leader in life… the world receives a special nuance, the Hermetic accent… This Hermetic accent is thoroughly empirical, and it remains within the realm of a natural experience of the world. The sum total of pathways as Hermes’ playground; the accidental “falling into your lap” as the Hermetic material; its transformation through finding – thieving – the Hermetic event – into an Hermetic work of art… (p54)

…one has a different experience of the world with an antique God than one would have without him. Speaking mythologically, each God is the source of a world that without him remains invisible, but with him reveals itself in its own light, and this world passes beyond the world-picture of natural science. (p55)

Through Hermes, every house became an opening and a point of departure to the paths that come from far off and lead away into the distance. Standing at the doorway, he indicates that there is a source of life and death, a place where souls break in, as though he were pointing out a spring of fresh water. (p84)

Whoever does not shy away from the dangers of the most profound depths and the newest pathways, which Hermes is always prepared to open, may follow him and reach, whether as scholar, commentator or philosopher, a greater find and a more certain possession. (p91)

And from Deldon Anne McNeely (Mercury Rising: Women, Evil, and the Trickster Gods, 1996), who has been strongly influenced by Kerényi’s work on Hermes:

The Trickster Archetype, old as mythology, has been held as an essential aspect of the divine by most cultures. But in the Judeo-Christian and Islamic theologies, whose approaches to morality dualistically polarize Good versus Evil, Trickster has no apparent place. In societies influenced by these contemporary theologies, Trickster’s qualities are more often subsumed by the Devil, the principle of evil. Trickster’s characteristics are also projected onto women as negative qualities… (p8)

You of many names … Trickster, Hermes, Mercurius, Melusina, Baubo, Thoth, Loki, Coyote, Eshu … I will call “Holy”. For in the great mystery that we humans know only through a dim and short-spectrumed vision, You are a bright facet of the divine. You manifest, by hook or by crook, in each of us. (p11)